Paestum, ancient city, southern Italy. Located on the Gulf of Salerno (the ancient Bay of Paestum), the city was founded in the 6th century BC by Greek colonists from Sybaris, who called it Poseidonia. It was taken by the Lucanians, an indigenous Italic people, in the 4th century BC. They ruled until 273 BC, when the city was captured by the Romans. Deserted after its sack by Muslim raiders in AD 871, the abandoned site's remains were discovered in the 18th century. It is known for its three Doric temples and its city walls of travertine blocks.
The main features of the site today are the standing remains of three major temples in Doric style, dating from the first half of the 6th century BCE. These were dedicated to Hera, Apollo and Athena, although they have traditionally been identified as a basilica and temples of Neptune and Ceres, owing to 18th-century misattribution. 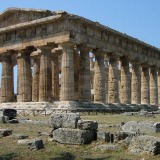 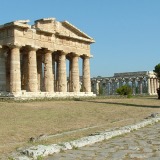