Mount Vesuvius (Italian: Monte Vesuvio, Latin: Mons Vesuvius) is a volcano east of Naples, Italy. It is the only volcano on the European mainland to have erupted within the last hundred years, although it is not currently erupting. The only other two such volcanoes in Italy (Etna and Stromboli) are located on islands. Vesuvius is on the coast of the Bay of Naples, about nine kilometres (six miles) east of Naples and a short distance from the shore. It is conspicuous in the beautiful landscape presented by the Bay of Naples, when seen from the sea, with Naples in the foreground. Vesuvius is best known for its eruption in A.D. 79 that led to the destruction of the Roman cities of Pompeii and Herculaneum. It has erupted many times since and is today regarded as one of the most dangerous volcanoes in the world because of the population of 3,000,000 people now living close to it and its tendency towards explosive eruptions.Mount Vesuvius was regarded by the Greeks and Romans as being sacred to the hero and demigod Hercules/Heracles, and the town of Herculaneum, built at its base, was named after him. 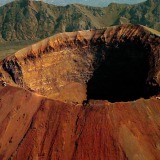 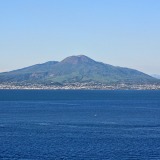 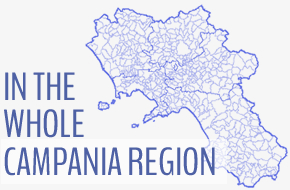